What are the seven thunders?

akin to bremó (to roar)

(Jesus) And his feet like unto fine brass, as if they burned in a furnace; and his voice as the sound of many waters.  Revelation 1:15

Thunder is often associated with judgment, “…The adversaries of the LORD shall be broken to pieces; out of heaven shall he THUNDER upon them: the LORD shall judge the ends of the earth; and he shall give strength unto his king, and exalt the horn of his anointed,”  1 Samuel 2:10.

And as Samuel was offering up the burnt offering, the Philistines drew near to battle against Israel: but the LORD THUNDERED with a great THUNDER on that day upon the Philistines, and discomfited them; and they were smitten before Israel.  1 Samuel 7:10

The LORD THUNDERED from heaven, and the most High uttered his voice.  2 Samuel 22:14

It appears that the seven thunders are calling out for God’s judgment upon the earth.

More evidence of the thunders being the voice of God, “…And out of the throne proceeded lightnings and THUNDERINGS and voices: and there were seven lamps of fire burning before the throne, which are the seven Spirits of God.  Revelation 4:5 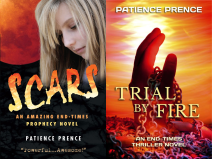 TRIAL BY FIRE takes you on an unforgettable journey through the apocalyptic ruins of a Northern California city into the vast wilderness where Brock must decide on which side he will fight. Will he bow down to the beast and take the mark?

Available in most bookstores including Amazon and Barnes & Noble available in ebook, paperback and audiobook!

One thought on “What Are the Seven Thunders?”