WHO IS THE ANTICHRIST BEAST?

In Bible Prophecy, the Antichrist or False Christ is an end-times character that will oppose God,  claim to be God and sit in the 3rd temple.  He will confirm a peace covenant with many including Israel for seven years, after 3 1/2 years he will stop the  sacrifices at the Temple and set up an Abomination that causes desolation.  The Holy Bible tells us many things about this person who will rule the world just before the second coming of our Lord and savior Jesus Christ.

And he (Antichrist) shall confirm the covenant with many for one week (7 years) : and in the midst of the week he shall cause the sacrifice and the oblation to cease, and for the overspreading of abominations he shall make it desolate, even until the consummation, and that determined shall be poured upon the desolate.  Daniel 9:27

And arms shall stand on his part, and they shall pollute the sanctuary of strength, and shall take away the daily sacrifice, and they shall place the abomination that maketh desolate.  Daniel 11:31

When ye therefore shall see the abomination of desolation, spoken of by Daniel the prophet, stand in the holy place, (whoso readeth, let him understand:) Then let them which be in Judaea flee into the mountains: Let him which is on the housetop not come down to take any thing out of his house: Neither let him which is in the field return back to take his clothes. And woe unto them that are with child, and to them that give suck in those days! But pray ye that your flight be not in the winter, neither on the sabbath day: For then shall be great tribulation, such as was not since the beginning of the world to this time, no, nor ever shall be. And except those days should be shortened, there should no flesh be saved: but for the elect’s sake those days shall be shortened. Then if any man shall say unto you, Lo, here is Christ, or there; believe it not. For there shall arise false Christs, and false prophets, and shall shew great signs and wonders; insomuch that, if it were possible, they shall deceive the very elect. Behold, I have told you before.  Matthew 24:15-25

What Does it Mean the Antichrist Will Change Times And Laws? 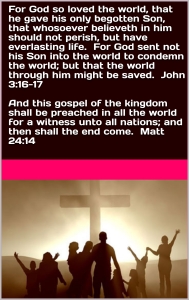 TRIAL BY FIRE  takes you on an unforgettable journey through the apocalyptic ruins of a Northern California city into the vast wilderness where Brock must decide on which side he will fight. Will he bow down to the beast and take the mark?

Available in most bookstores including Amazon and Barnes & Noble in paperback, ebook and audiobook!.