15 Verses that Jesus Speaks about His Return

# 1 – Jesus answered: “Watch out that no one deceives you. For many will come in my name, claiming, ‘I am the Christ,’ and will deceive many. And many false prophets will appear and deceive many people. At that time if anyone says to you, ‘Look, here is the Christ!’ or, ‘There he is!’ do not believe it. For false Christs and false prophets will appear and perform great signs and miracles to deceive even the elect–if that were possible. See, I have told you ahead of time. “So if anyone tells you, ‘There he is, out in the desert,’ do not go out; or, ‘Here he is, in the inner rooms,’ do not believe it. For as lightning that comes from the east is visible even in the west, so will be the coming of the Son of Man. Matthew 24:4-5; 11; 23-27

# 2 – At that time the sign of the Son of Man will appear in the sky, and all the nations of the earth will mourn. They will see the Son of Man coming on the clouds of the sky, with power and great glory. And he will send his angels with a loud trumpet call, and they will gather his elect from the four winds, from one end of the heavens to the other. (Matthew 24:30-31)

# 3 – For the Son of Man is going to come in his Father’s glory with his angels, and then he will reward each person according to what he has done. Matthew 16:27

# 5 – It was the same in the days of Lot. People were eating and drinking, buying and selling, planting and building. But the day Lot left Sodom, fire and sulfur rained down from heaven and destroyed them all. “It will be just like this on the day the Son of Man is revealed. (Luke 17:28-30)

# 6 – Be careful, or your hearts will be weighed down with dissipation, drunkenness and the anxieties of life, and that day will close on you unexpectedly like a trap. For it will come upon all those who live on the face of the whole earth. Be always on the watch, and pray that you may be able to escape all that is about to happen, and that you may be able to stand before the Son of Man.” Luke 21:34-36

# 7 – Two men will be in the field; one will be taken and the other left. Two women will be grinding with a hand mill; one will be taken and the other left. “Therefore keep watch, because you do not know on what day your Lord will come. But understand this: If the owner of the house had known at what time of night the thief was coming, he would have kept watch and would not have let his house be broken into. So you also must be ready, because the Son of Man will come at an hour when you do not expect him. Matthew 24:40-44

# 8 – At that time the kingdom of heaven will be like ten virgins who took their lamps and went out to meet the bridegroom. Five of them were foolish and five were wise. The foolish ones took their lamps but did not take any oil with them. The wise, however, took oil in jars along with their lamps. The bridegroom was a long time in coming, and they all became drowsy and fell asleep. “At midnight the cry rang out: ‘Here’s the bridegroom! Come out to meet him!’ “Then all the virgins woke up and trimmed their lamps. The foolish ones said to the wise, ‘Give us some of your oil; our lamps are going out.’ “‘No,’ they replied, ‘there may not be enough for both us and you. Instead, go to those who sell oil and buy some for yourselves.’ “But while they were on their way to buy the oil, the bridegroom arrived. The virgins who were ready went in with him to the wedding banquet. And the door was shut. “Later the others also came. ‘Sir! Sir!’ they said. ‘Open the door for us!’ “But he replied, ‘I tell you the truth, I don’t know you.’ Matthew 25:1-12

# 10 – Do not let your hearts be troubled. Trust in God; trust also in me. In my Father’s house are many rooms; if it were not so, I would have told you. I am going there to prepare a place for you. And if I go and prepare a place for you, I will come back and take you to be with me that you also may be where I am. John 14:1-3

# 15 –  Whosoever therefore shall be ashamed of me and of my words in this adulterous and sinful generation; of him also shall the Son of man be ashamed, when he cometh in the glory of his Father with the holy angels.  Mark 8:38 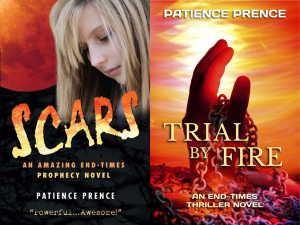 Patience Prence is the bestselling author of SCARS: An Amazing End- Times Prophecy Novel and the sequel Trial By Fire: An End-Times Thriller Novel. Patience writes Christian fiction novels set in the near future as described by the Apocalypse of John.